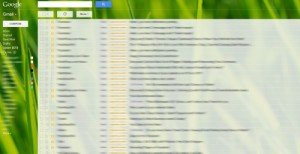 But setting all the hype aside, what actual promotional power is still left in email marketing in 2013? Well, since I couldn’t answer this question myself without doing a massive amount of guessing work, I’ve decided to do some research and find the latest stats published on the topic (email marketing stats 2013; sources at the bottom of the post). This post gathers the things I came across.

This is the first quite interesting fact on the list. Even though people prefer email promotion over other online channels, they are still quite click-happy with the “spam” button in their email software (like Gmail).

To be exact, ExactTarget says this:

While various other email marketing stats point out the following reasons for clicking the “spam” button:

The conclusion here is that for some people, marking as spam is easier than unsubscribing from a newsletter or taking any other action.

Moreover, a sizable 30% of subscribers change email addresses annually, while 17% of Americans do it every 6 months. Well, if you ask me, it’s hard to point out any other reason for changing email addresses than the desire to start over with a blank inbox. In other words, it mostly happens because of spam.

People buy because of email

Despite the protective behaviors, it turns out that email marketing still produces great results for people and brands that use it actively. For every $1 spent, $44.25 is the average return on email marketing investment.

A study shows that 82% of consumers open emails from companies. And to be clear about it, these customers know that the email actually comes from a company; they are not tricked in any way.

And this is not only about open rates. It’s estimated that 44% of email recipients made at least one purchase last year based on a promotional email. Even if the purchase wasn’t immediate, it was possible to trace it back to an email message.

What’s even better in this whole picture is that people who buy products marketed through email tend to spend 138% more than people who do not receive email offers.

This effectiveness of email is still more or less unknown. I mean, there are some theories, but it’s mostly guessing game. For instance, one of the possible reasons pointed out by ExactTarget is:

Email is thriving thanks in large part to the channel’s familiarity, flexibility, and universality.

Now, since we know that email does work, let’s get to the good stuff, which is how to compose an email that wins:

Subject line is be all end all of email marketing

This shouldn’t be much of a surprise, but subject lines still rule email, so to speak. In other words, if you want your campaign to be successful, you absolutely must spend a sizable amount of time on crafting the subject line alone.

But this is something we’ve known for a long time. However, the scope of the subject line’s importance in 2013 is … impressive, to say the least. TheÂ email marketing stats don’t leave much room for speculation:

Different sources indicate that anything from 33% to even 64% of people open email based on the subject line alone. Without taking into account things like the sender, the presence of attachments, or anything else.

For instance, personalized subject lines are reported to be 22.2% more likely opened than standard ones.

As for short subject lines, the stats show us that subject lines fewer than 10 characters long had an open rate of 58% (which is great, by the way; the standard across industries is 15% to 24%).

There’s no data on combining the two approaches together though – making the subject line both short and personalized.

Well, when I say unknown, the actual fact is that a great number of people use mobile devices to access their email and they absolutely love this way of dealing with it.

It turns out that 39% of marketers have no strategy for mobile email other than just sending out a standard newsletter to everybody.

I personally believe that making email mobile friendly is where the next big leap in email marketing will take place.

Social media has been with us for a while, but it’s only recently that various marketers decided to integrate some social capabilities into their newsletters.

This seems to be bringing great effects as emails that include social sharing buttons have a 158% higher click-through rate.

Although the numbers are impressive, they might be a result of an early-on craze. This means that after a while, things will likely ease out. Anyway, capitalizing on this trend now when it’s still hot, is a great idea.

Sticking to the topic of social media vs. email, it’s reported that:

Consumers’ preference for email as a personal communications channel has dropped 21% since 2008 while their preference for text messaging and social media have grown 20% and 10%, respectively.

From my point of view, this is only the email marketing stats catching up on the real world. It’s been apparent for more than 2-3 years now that people love social media for all quick human-to-human interactions.

Although all of the stats are cool and they can be a great source of information, it’s actually easy to misread things. For instance, one of the common problems is that what people say they would do is not always the same as the thing they will actually do.

For instance, the already quoted research by ExactTarget stated that:

But this doesn’t mean that people will actually prefer email…

If you want to check this principle by yourself then just prepare a fake pitch for a nonexistent product and try it out on your friends. Ask them something like “would you buy something that would do X for you?” And when they say yes, which some of them will, immediately follow up with “hey, it just so happens that I have it in the trunk of my car, would you want me to get you one now?” then see what happens… You’ll most likely hear a sea of excuses. Anyway, I digress.

What I wanted to say is, again, that stats are stats, and they are never an oracle of the things you should do with your marketing.