I need to confess something to you.

Remember the big comparison feature I did on the top productivity / to-do tools out there?

Well, shortly after publishing it, I went all the way back to full caveman style, handling my to-do lists on paper. You know, as in dead trees. Not an app called Paper or whatever.

So yeah, pretty offline. Actually as offline as it can get.

The superiority of paper

Quite randomly, I stumbled upon this video by Neville from AppSumo -»

His method – using just a legal pad – seemed like an efficient and interesting one, so I’ve decided to give it a go.

And boy was I in love with it from literally task one!

If I were to point out a single reason why paper to-dos still manage to be more efficient than apps, it would have to be the simplicity of paper.

When you look at it, a to-do list shouldn’t have a big learning curve. You should just be able to use it right away because in the grand scheme of things, the to-do list itself is not important. It’s the tasks that are listed on it that are important.

Paper is something everyone can use, and with some general guidelines, they can use it very effectively. There’s very little learning curve.

The problems with apps

Apart from the steep learning curve of most apps, there’s also something that’s potentially even more problematic.

And that is the implied encouragement to cramp your list with 10-20 tasks at a time (for a single day’s worth of work).

It’s the design of the screen, the structure, and the functionality that encourages us to do so.

Just look at the following example. It’s my all-time-favorite app for to-dos – Remember The Milk (by the way, it’s still THE top app in my opinion, so if you’d like to stay with apps, I strongly encourage you to test it out): 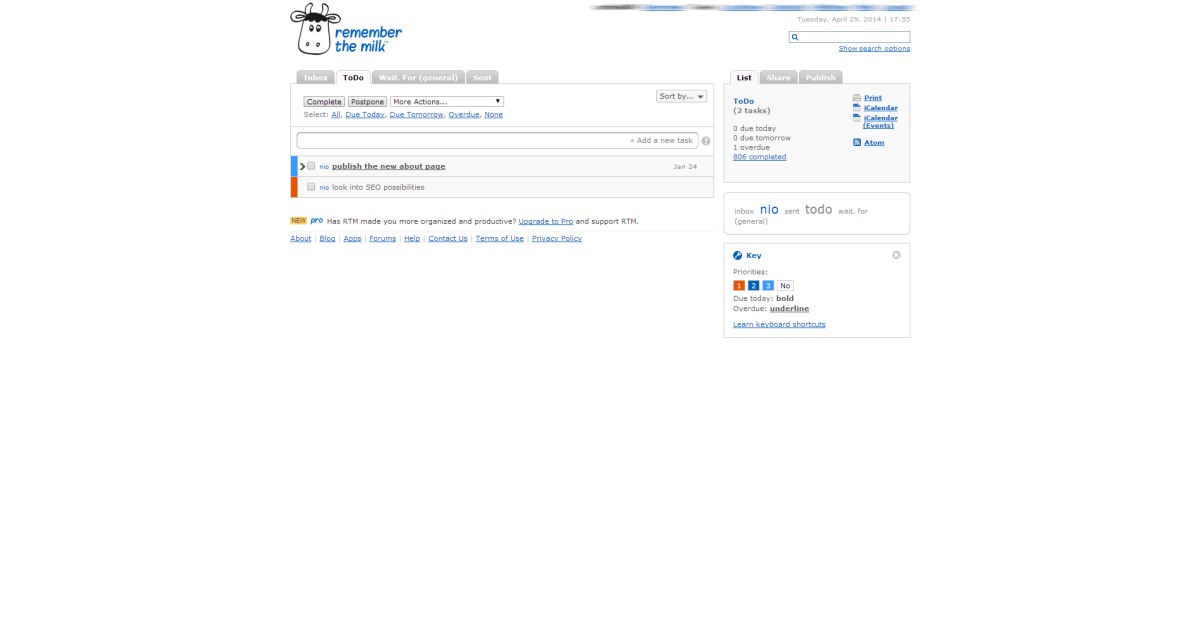 This’s been taken on a 1920p HD screen. Just notice how much space there is. The app is literally begging for you to fill it out with more and more tasks.

And it sure as hell ain’t productive.

There’s no such problem with paper. You can only fit so much stuff on a piece of paper.

Why you shouldn’t have too many tasks on your list

So you can pretty much already see where I’m going with this whole message. It’s this:

The main idea is to not have too many tasks on your to-do list.

I don’t know why that’s the case; maybe it’s human nature or something, but chances are that if you have 15+ tasks on your list, you will do almost next to nothing during that day.

But if you have just, say, five then you’re very likely to take care of them all.

“But Karol, I have to do more during my day than just five things!”

And please don’t get all defensive with me; I was there too!

I too thought that I needed to handle 15+ things at the minimum each day, or the world would stahhppp!

However, every interview and every podcast I listened to kept trying to teach me otherwise. I mean, there were all those successful business people on the air talking about pretty much the same productivity method again and again. It went something like this:

Have just one crucial task per day – the task that needs to be done no matter what. And apart from that have only 2-4 more side tasks.
Don’t do anything that doesn’t get you closer to your goals, and don’t add more tasks after you’re done with the initial set.

Now here’s the thing – and also the thought I had in the back of my head – if those uber-successful people can build their legacy on just 3-5 tasks per day then why can’t I, damn it?!

Or maybe I can?

Eventually, and inevitably, I’ve decided to give this a go. And guess what, it does work!

I’m way more productive doing just 3-5 tasks every day than I’ve ever been trying to plan for 10+.

So finally, after friggin’ 700 words of introduction, here’s one of the two productivity solutions I want to share with you.

(The other one will go live as a guest post shortly, I will keep you informed. I know that there’s no one-size-fits-all solution for everyone, so I want to give you two alternatives. Both paper-based and both effective.)

The one I have for you here is called:

the daily action cards (or the daily task cards)
The idea is to follow the process that’s used in most restaurants. I know, weird, but hear me out.

In a restaurant, there’s often an area called the pass. It’s where the final plating is done, and it’s also where you can find the check rail. Looks like this -» 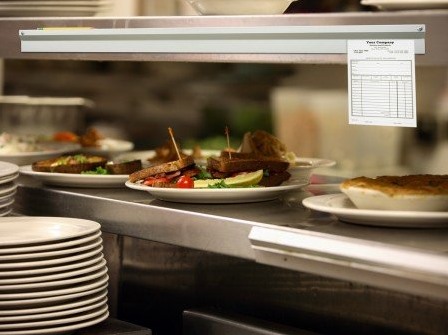 So with the daily action cards, we’re creating something very similar. Here’s my actual setup with the task rail: 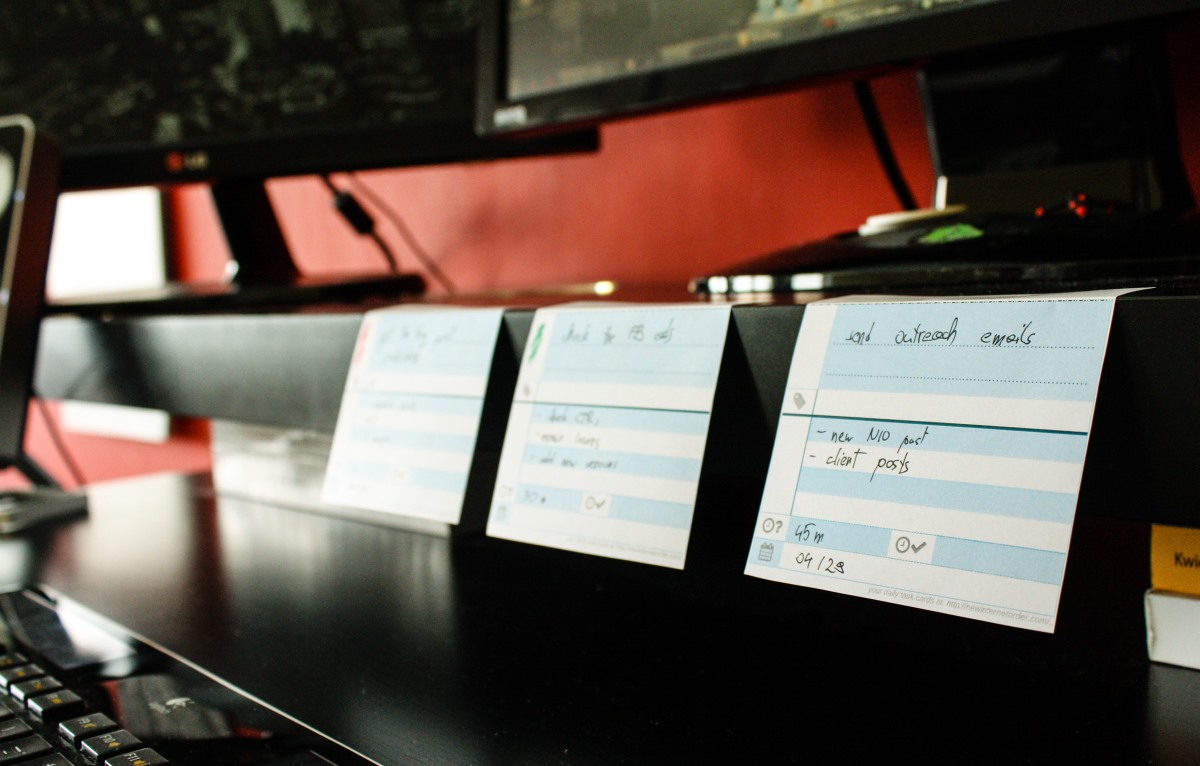 Each card represents a single (yet not all that simple) task. When the task is done, the card can be discarded or kept for reference.

Let’s break down an individual card: 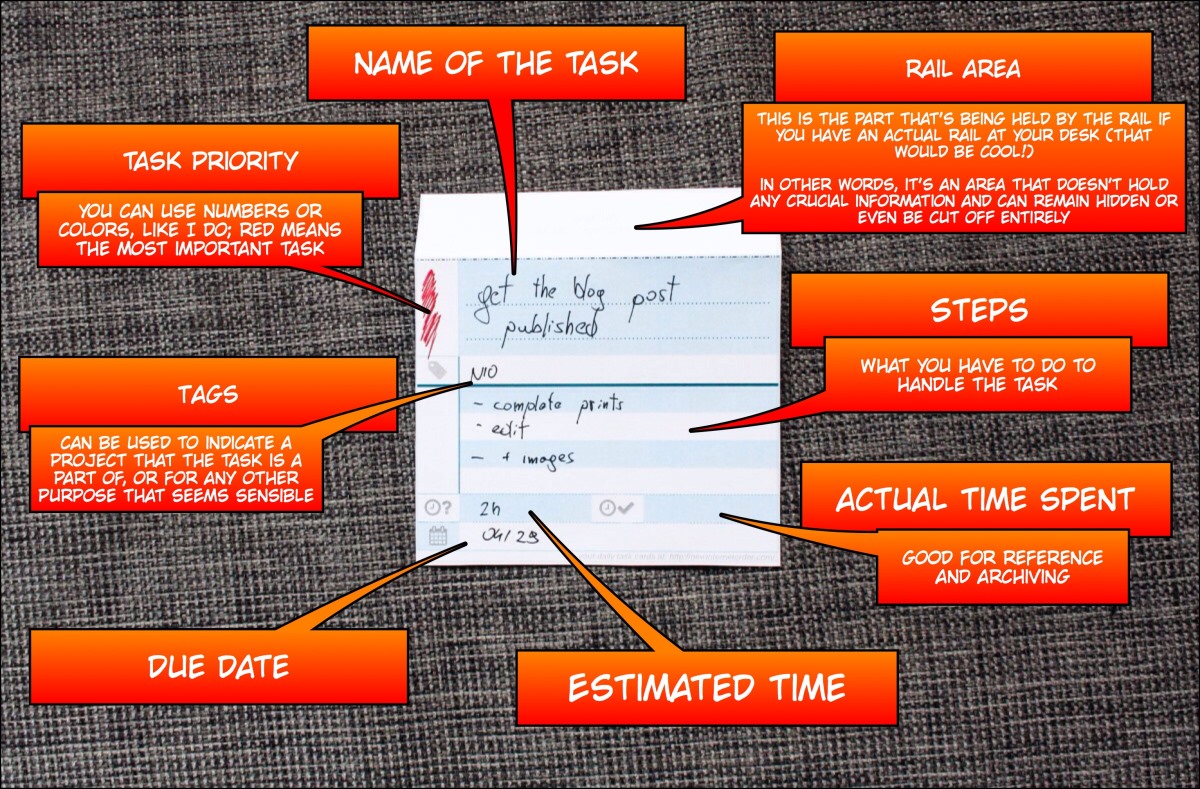 Here’s the download link for the printouts (no opt-in … but please do opt in if you like this stuff; I have way more goodies waiting on the other side).

It’s a PDF. Just print it out on a standard A4 sheet of paper. Each page holds 6 cards. 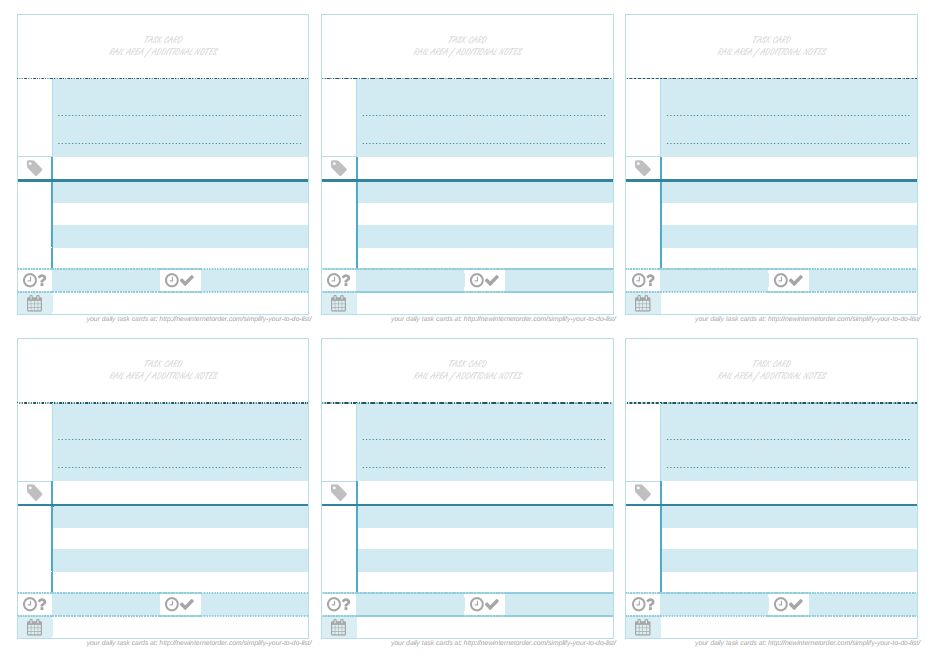 Looking for some online business advice for normal people
and more resources just like this one? Jump in.

By the way, when doing my research, I found that Dave Seah designed something similar a couple of years ago. Feel free to check it out if my version is not 100 percent up your alley.

11 thoughts on “1 Simplistically Simple Way to Simplify Your To-Do List (Hint: It Involves the -P-)”